When did daft Government do-gooders start giving advice on the safer use of the killer-drug ecstasy?

Nothing like an office spring clean to turn up a piece of harm reduction history.

After spending the last few months looking at a stupidly cluttered office, and in honour of the beginning of Spring, we decided it was time for a bit of a tidy up. Rooting through some old boxes, trying to decide what to shred, we came across a copy of the Mersey Drug Journal, a copy of the International Journal on Drug Policy (the grown-up version of the MDJ) and a dog-eared copy of Chill Out - A Raver's Guide.

After wondering who was to blame for using such a shit typeface on the cover of the raver's guide, we cast our mind back to the furore that Chill Out caused at the time. 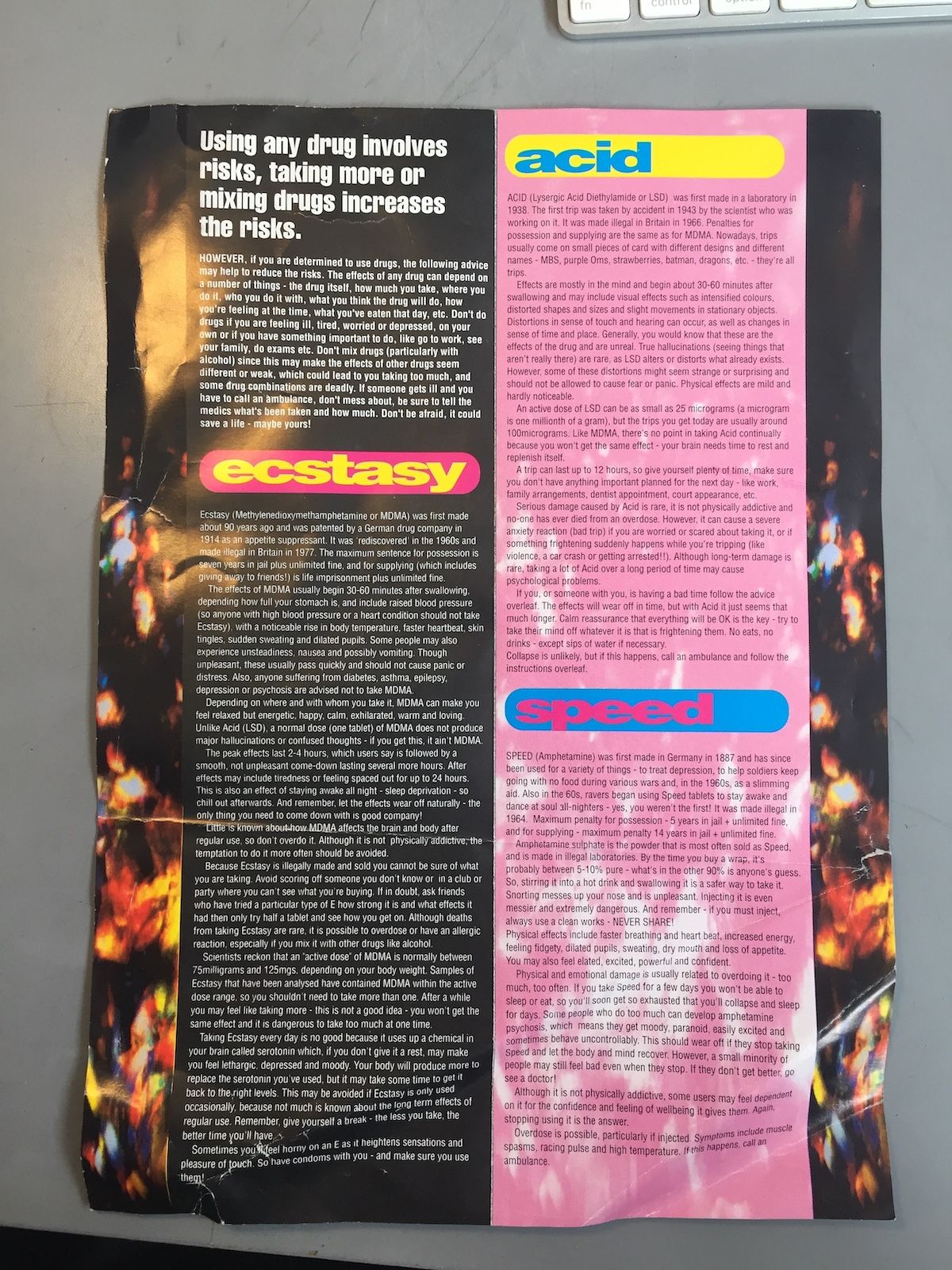 Chill Out - A Raver's Guide. Inside pages 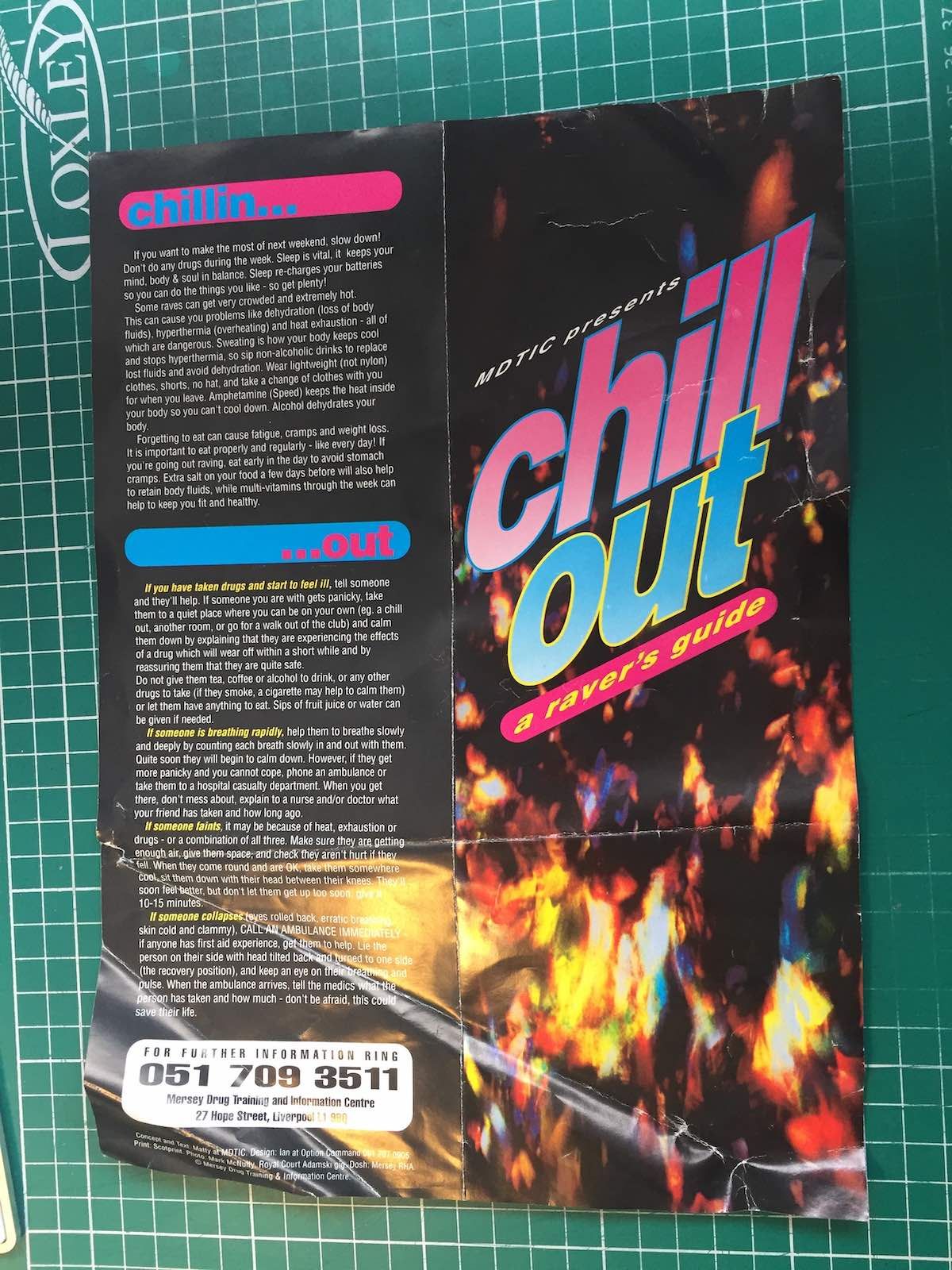 Chill Out - A Raver's Guide. Front and back pages

‘What a dope: daft do-gooder tells kids it's ok to use killer drug'. This was the sensationalist headline, in a January 1992 edition of the Daily Star. It condemned a drug information leaflet, called 'Chill Out - a Ravers Guide' - an ecstasy harm reduction guide, written by Alan Matthews and Peter McDermott, who at the time worked with the Mersey Regional Drug Training & Information Centre (MRDTIC), a pioneering drug information unit based in Liverpool.

It was only a few weeks earlier we had been commissioned by MRDTIC to work with them on the design and format of Chill Out, and only a few days earlier had dropped off a few thousand shiny new Chill Out leaflets. It wasn't long before the fan started to smell a bit!

The leaflet contained information about the three main drugs used on the club scene at the time: Ecstasy, LSD and amphetamine. It considered the risks involved in using those drugs, methods to try to minimise the risks, and how to deal with an overdose. The kind of information considered essential by today's standards. The moral majority were not happy!

We had worked previously on information resources for the first Syringe Exchange Scheme in the UK - also on behalf of MRDTIC, so we were used to controversial health initiatives. But this was our first real experience of how misleading media headlines and attention-seeking indignation could be used to misrepresent a message and a critical piece of health information.

The attention-seeking indignation was ramped up by various public figures, one of them Ken Hind MP, who at the time was the Conservative Member of Parliament for West Lancashire. In an outburst of moral outrage, he said: "This is a disgraceful waste of public funds. I shall today send a letter to the Chairman of Mersey Regional Health Authority demanding such funding is immediately withdrawn."

So how did 2 sides of A4 cause the great and good to choke on their moral outrage?

When we Look back on it today, most of the literature at the time was focused on the condemnation of drug use and drug users, abstinence was the only option offered. The Nancy Reagan-inspired 'just say no' message was gaining traction, and all drug users were skanky, disease-ridden sociopaths, who were coming to nick your VHS player. Drug information leaflets were splattered with images of shady-looking figures. hoodies pulled up, hiding furtively in the shadows - or were covered in coffins, skeletons and headstones. It was easy to add to the demonisation - especially for a vote-chasing MP.

Have things changed? We popped across to a website called Frank, the official Government website for information about drugs. We wondered if nearly thirty years later any of the information that was provided by Chill Out had trickled down to the mainstream. So we had a peek at the Frank ecstasy page.

'Because the strength of ecstasy pills are so unpredictable, if you do decide to take ecstasy, you should start by taking half or even a quarter of the pill and then wait for the effects to kick in before taking any more – you may find that this is enough.

'If you’re taking MDMA, start by dabbing a small amount of powder only, then wait for the effects to kick in.

'Ecstasy affects the body's temperature control. Dancing for long periods in a hot atmosphere, like a club, increases the chances of overheating and dehydration. Users should take regular breaks from the dance floor to cool down and watch out for any mates who are on it – as they might not realise they're in danger of overheating or getting dehydrated.

'Drinking too much (including water) can also be dangerous. This is because ecstasy can cause the body to release a hormone which stops it making urine. If you drink too quickly you might affect your body's salt balance, which can be as deadly as not drinking enough water'.

It's uncanny how closely some of the information it contains reflects the pioneering advice given out in the early '90s. Now that's what we call turning moral outrage into a moral victory.

We still knock out the occasional double-sided A4, and the principles of good communication and design remain the same: Don't sensationalise and don't stigmatise.

Provide your intended audience with credible, evidence-based information, well designed, in a tone that they can engage with and understand, and you're message will have a positive impact and encourage safer behaviour - and history will always be on your side.

We love you all:

DON'T MISS OUT!
Sign up for lots of lovely public health and substance misuse news, blogs and resource updates.